Gumi: The Role Obasanjo & I Played In The Release Of 27 Afaka Students

Popular Islamic Scholar Sheikh Ahmad Gumi has assured the remaining 16 of the kidnapped Greenfield varsity students would be released soon. He said negotiations were ongoing with the bandits who […]

Fayemi To Adeyeye: Formation Of SWAGA For Tinubu 2023 Is A Misnomer

The Ekiti State Governor, Dr Kayode Fayemi has fired back at former Minister of Works, Dayo Adeyeye over his recent comments as regards development in the ruling All Progressives Congress […] 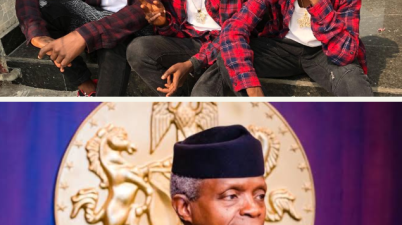 The Vice President of Nigeria, Professor Yemi Osinbajo, has honoured the Ikorodu Bois for their creativity on today’s episode of his Thumbs Up Thursday. The comic group consists of Muiz […]

Ghana Expelled 541 Nigerians & They Were Abandoned At The Nigerian Embassy

Ghana’s police and immigration have arrested and expelled 541 Nigerians and about 2,000 Togolese and Burkinabe for “overpopulating a community”. Many of those arrested had lived in Ghana for years. […] 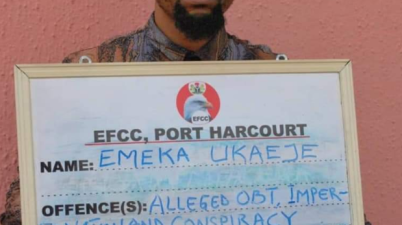 Operatives of the Port Harcourt Zonal Office of the Economic and Financial Crimes Commission, EFCC, have arrested leader of a syndicate selling and buying human organs for trafficking to foreigners. […]

Suspected imposters, Aminat Oluwabukola Jomoh, Olalekan Oladehinbo Adenuga ànd others are been investigated by operatives of the Department of State Services, (DSS) for impersonating the Speaker of the House of […]

My deepest sympathies to the family of Pastor Enoch Adeboye, General Overseer of the Redeemed Christian Church of God (RCCG), on the passing of his son, Pastor Dare Adeboye. I […]

President Muhammadu Buhari, on Thursday, said the ongoing synchronisation of National Identification Number with SIM cards will help the nation to easily identify crooks.Speaking while inaugurating the National Policy for […]

Unknown gunmen early hours of Thursday invaded Obiozara police station in Ohaozara local government area of Ebonyi state and killed one inspector on duty. The gunmen were said to have […]

Unknown gunmen have kidnapped over 100 people in Shadadi town in Niger state, killing 8 and leaving 4 injured. A source who spoke with BBC Hausa said more than 1, […]

How Obasanjo, Gumi & Father Of A Bandit Facilitated Release Of Afaka Students

Nigeria’s security chiefs are currently appearing before the Senate in plenary. Their appearance is in response to an invitation by the Senate last week – over the security situation in the […]

A socio cultural group, Kiriji Heritage Defenders, on Wednesday raised the alarm over alleged incursion into Osun by some Fulani herders expelled from Kwara towns early this week. The Director […]

At least, five soldiers were reportedly killed by Boko Haram insurgents on Tuesday in Ajiri community, Mafa Local Government Area of Borno State. The incident happened after the visit of […]

The entire Ogun State is filled with joyful moment as His Excellency, Prince Dapo Abiodun, MFR, and the Honourable Commissioner for Culture and Tourism Hon. Dr. Emmanuel Taiwo and other […]

N15m Ransom: One Bandit Released In Exchange For 27 Kaduna Students

Fifty-five days after they were abducted from the Federal College of Forestry Mechanisation, Afaka in Igabi Local Government Area of Kaduna State, 27 students of the 37 abducted from their […]

The Ogun State Government has been nominated to benefit from three Federal Government’s agricultural pilot programmes aimed at further positioning the state as the food basket of the country. The […]

Osinbajo: Working Together, Nigeria Will Realize Its True Potentials

STATE HOUSE PRESS RELEASE.* *_WORKING TOGETHER, NIGERIA WILL REALIZE ITS TRUE POTENTIALS_* — *OSINBAJO.* *Former Ogun Gov Daniel tells VP:* _We know your job is not easy, but we are […]

Buhari Has Surrendered To Terrorists —PDP

The Peoples Democratic Party has said the “statement by the Minister of Information and Culture, Lai Mohammed, that the Federal Government is not duty-bound to protect Nigerians from bandits, has […]

OOGF ENROLLS 6-YEAR-OLD PHYSICALLY CHALLENGED OPEYEMI INTO SCHOOL To further strengthen the hope of Master Opeyemi Akinsanya, the physically challenged boy and make his dreams and aspirations to becoming an […]

Pastor Dare Adeboye, the son of the General Overseer of the Redeemed Christian Church of God Worldwide, Enoch Adeboye, is dead. The PUNCH gathered that the 42-year-old, who is the third […]

Obi-West: Surviving Seduction From A Nigerian Lady Saved Me From Contracting HIV

The Lagos State Government says it has placed 4,000 unemployed graduates on N40,000 monthly salary for six months. The Commissioner for Wealth Creation and Employment, Mrs. Yetunde Arobieke, made this […]

How Ejike Mbaka Disappeared And Reappeared In A Motorcade

Obasanjo: If Nigeria Breaks Up, Minority Groups Will Be Exterminated

Former President Olusegun Obasanjo on Wednesday described calls for the disintegration of Nigeria as unmindful and insensitive to the plight of the minority groups in the country. Mr Obasanjo made the […]